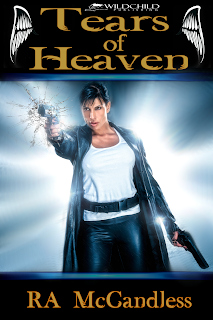 In the past, the children of angels and humans, the Nephilim, were allowed to lead their lives as they willed. But they proved too strong, too ambitious, and too cunning for their own good. They became warlords, conquerors and emperors. They caused war and strife until the Throne stepped in and forced them to submit to Its will, or die.

Unlike most of her fellows, Del, one of the first Nephilim, had no interest in conquest and domination. In the ancient past, prior to the Throne’s interdiction, she met and fell in love with Dami, a Mediterranean ship captain and trader. Together, they face down pirates and storms and try to create a future together.

In the present, Del unwillingly works for the Throne, obeying the commands of the angel Ahadiel.  She helps to keep the world safe from the horrors of escaped demons. At the same time, she keeps herself in the Throne’s good graces.  Whenever a rogue demon breaks free from Hell, she and her partner, Marrin, another Nephilim, work together to banish it.

Thrilling danger, fast-paced adventure, high-seas action, and heart-warming romance fill this novel, with a page-turning story that won’t let you put it down.
From Wild ChildPublishing
December 2013
Goodreads